Charyn National Park is located in Kazakhstan, about two hundred kilometers from the border with China. The Park itself is a long canyon including various attractions. One of them is the relict grove of ash at the bottom. It managed to survive the Ice age! The length of the entire canyon is 154 kilometers, and the height of the cliffs varies from 150 to 300 meters. The age of sedimentary rocks that make up the canyon is estimated at 12 million years. The entire canyon runs along the river, which is also called Charyn. 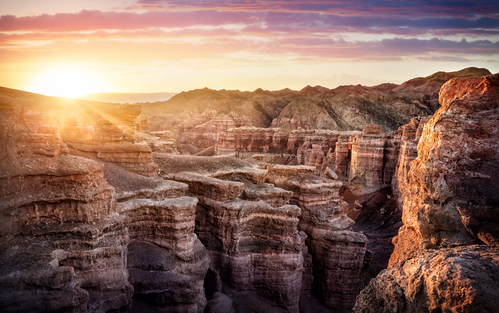 The Valley of Castles, a piece of particularly spectacular rocks, is one of the most popular places to visit in the Park. The canyon width ranges from 20 to 80 meters here. The height of the bizarre cliffs is up to 150 meters.

The nearest international airport is located in Almaty, the capital of the Republic. The distance from the capital to the Charyn National Park is about 236 kilometers. Tourist infrastructure, guest houses, and cafes take place at the territory of the Park. The entire crew can be comfortably placed there.

One of the previous articles touched upon the mountains of Dagestan. However, this territory has more great locations! One of them is the Sulak canyon. This canyon is almost untouched by the tourists. Its exclusivity is guaranteed (we don't even have a good photo of this place). Its length is 54 kilometers, depth is 1920 meters. It is 120 meters deeper than the Grand Canyon, USA. There is a river called Sulak at the bottom of the canyon, which gave the name to this stunning place. This river has a bright turquoise color. This landscape, combined with the bright greenery on the banks, makes a breathtaking impression.

Not only full-scale filming of impressive nature but also reality shows dedicated to extreme tourism could be shot there. Going down the rocks is recommended only for people with serious physical training.

Makhachkala is the nearest major city with an international airport. It takes about 200 kilometers from Makhachkala to Sulak canyon.

Ala-Archa National Park is located just 40 kilometers away from Bishkek the capital of Kyrgyzstan. The Park covers an area of 2280 hectares. Almost all of its territory is occupied by huge mountains and rocks. Technically, it's not a canyon but a gorge. The river Ala-Archa flows there. The place is very popular with the local population for weekend tours. Of course, summer is the best season for outdoor activities. However, the whole park is transformed in winter. One can enjoy high snow-capped mountains that create an incredible impression. 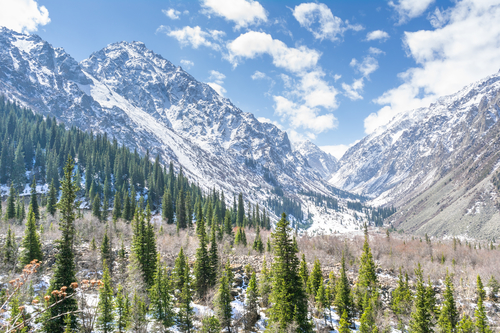 A small distance from the capital of the Republic of Bishkek is a great virtue. This fact significantly simplifies the logistics and placement of the TV or filming crew.