Film and television producers followed the Chinese government, that announced the new economic policy of the «Silk road» development. Recently a well-known among the international media community producer Stanislav Solovkin founded a new company - «Soar Productions». The aim of this ambitious projects is to set up a television Silk Road through its historic way. And the first in this row of countries will be Kyrgyzstan.

According to Stanislav, the western producers and directors along with their India, China and South-East Asia colleagues are starving for the new, unique and non-cliche shooting locations for their masterpieces. Their Hollywood and Bollywood interiors are to «crowded». The rapidly growing TV an film production market is looking for the new locations.

Stanislav states, that Kyrgyz Republic is the perfect country for the TV and film shooting. It is unbelievably beautiful, colourful and exotic for many people. Besides, in the relatively small territory of Kyrgyzstan you can find the maximum concentration of natural, cultural and architectural diversity. And the life level, that is still lower, than the most of the developed countries, allows to attract Kyrgyz specialists with mutual benefit.

«There are two worlds without a bridge between them, - says Stanislav. - The first world is the television industry, which should constantly surprise the audience with the new images. The second is the world of the country, that has something to surprise with. This worlds exist without any tangency points and even if they interact with each other, they can hardly come to an agreement. The foreigners are hold back by the myths of prevailing corruption in Kyrgyzstan, the country with constant revolutions and street gangs. And the most of our fellow country men think, that any foreigner with a camera is going to tar the reputation of the republic. And the best, that this foreigner can make is «Borat»-style tastelessness. By the way, the «Borat» came out as it did only because of the lack of communication between the TV authors of the film and Kazakhstan people».

Stanislav thinks, that the company and the web-site www.soartv.tv, which starts to work at the end of this week, will help to establish the contact between the TV community and the Kyrgyz republic. And the interest of the country in this case is obvious. Nothing attracts the tourists as TV and films.

FYI: Stanislav Solovkin - TV producer, devoted 20 years of his life to creation of the international TV projects. For the last seven years he takes part in the key projects of such giants as CBS, BBC, Discovery, Channel 7 Australia, Travel Channel, Sci-Fy, Channel One Russia, TVC, NTV and many others. 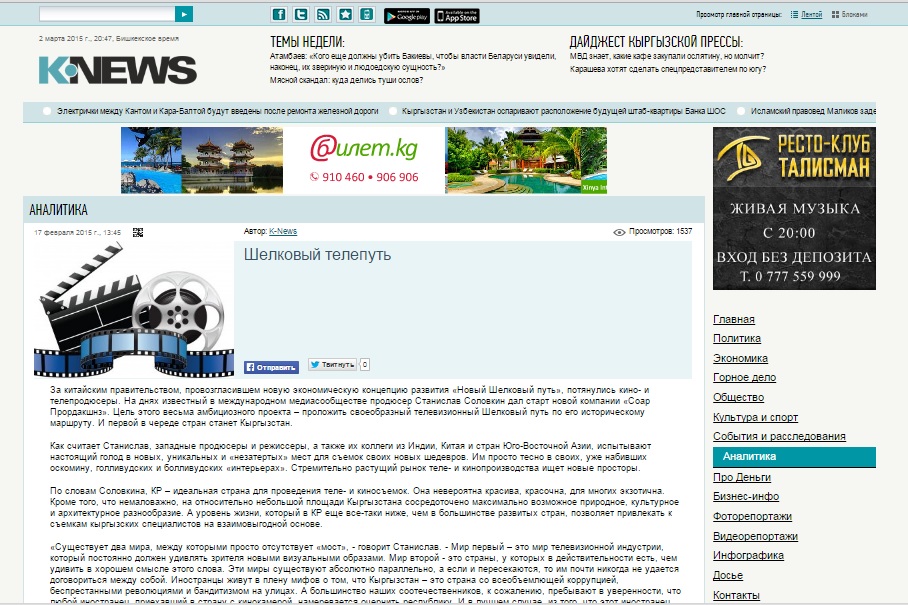