If you are looking for places for outdoor shooting that will impress your audience from the first shots, pay attention to Kamchatka. In this article, you will learn about Kamchatka volcanoes and the Black beach. 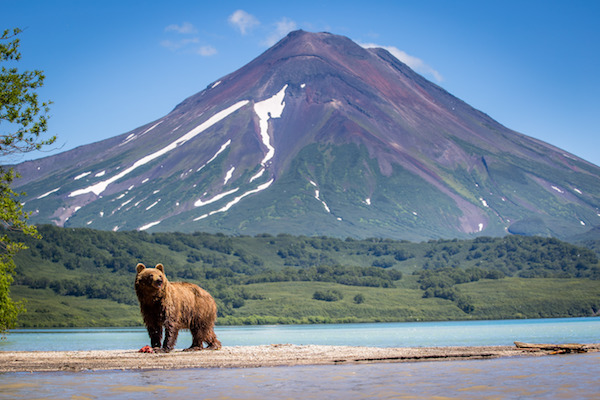 Where is Kamchatka located?

The Kamchatka Peninsula is the most remote point of Russia. Comparing to Moscow, it is the opposite side of the country, and the time difference with the capital is 9 hours. Hawaii, Japan, and Alaska are much closer to the Peninsula than many major Russian cities. The Peninsula borders on the Pacific Ocean. This region is still poorly populated, with a population density of only 0.7 people / km2. This is largely due to the harsh natural conditions. The Peninsula is located in the so-called Pacific Ring of Fire. This region is located on the edge of the Pacific Ocean, and that’s why there is increased seismic activity. There are also many active volcanoes in Kamchatka. There are earthquakes and a constant danger of tsunamis from time to time. Several villages were rehoused because of these cataclysms. The tsunami destroyed the whole city of Severo-Kurilsk in 1952.

About 3000 volcanoes are believed to be on the territory of the Kamchatka Peninsula. There are dead, already lost, and active volcanos. 32 volcanoes are active nowadays. Some of them are silent for hundreds of years, while others remind of themselves almost every year. Of course, scientists constantly monitor the activity of volcanoes. It has become much easier due to advanced technologies. For example, it is possible to observe remote volcanoes through satellites. The main purpose of these observations and studies is the ability to predict volcano eruptions in Kamchatka and to calculate the possible consequences. The largest Shiveluch volcano can pose a serious threat to international airlines. Its ash outflow height can reach 20 kilometers, and the ash clouds stretch for hundreds of kilometers around. 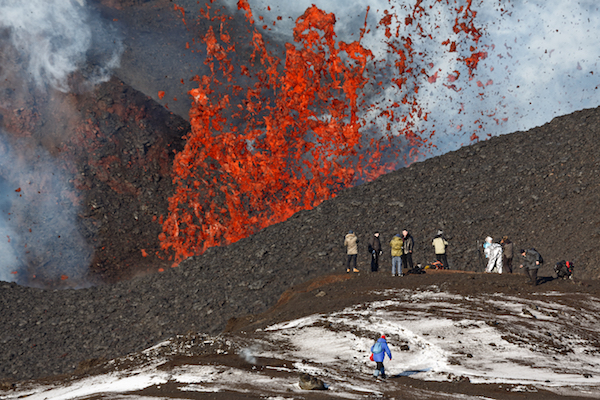 Another famous volcano is Klyuchevskaya Sopka. This is the largest volcano in Eurasia. It is a permanent volcano, located close to the village of Klyuchi. This volcano is a kind of visiting card of Kamchatka, its height is 4850 meters, and the liquid volume is estimated at 290 km3. Klyuchevskaya Sopka has been functioning for hundreds of years. It is interesting that the top of the volcano is covered with ice, as well as other hills, located next to it. Scientists have a unique opportunity to observe the interaction of ice and hot lava and with eruptions. This phenomenon is considered to be rare. In such cases, ice explosions occur due to the collision of too low and too high temperatures. Large eruptions with lava flow tale place about once every 25 years, the rest of the time Klyuchevskaya Sopka is smoky.

The beauty of Kamchatka is undeniable, although it can scare. However, there is a place that can show the other side of Kamchatka brutality. Khalaktyrsky beach, the locals simply called the Black beach, is a truly unique place on our planet. This huge coastline of approximately 40 kilometers consists entirely of black sand of volcanic origin. The thickness of the sand layer is about 20 meters. This place is very popular among locals for picnics and walks. There are no housing and commercial enterprises (shops, restaurants, bars) because of the constant threat of a tsunami. The black beach has become a well-liked place for surfers. The Pacific Ocean gives a long wave and true surfers cannot resist it. By the way, the water temperature is only about 15 degrees even on hot days. Many people just like to lie on the warm sand. It warms up very well because of its black color. 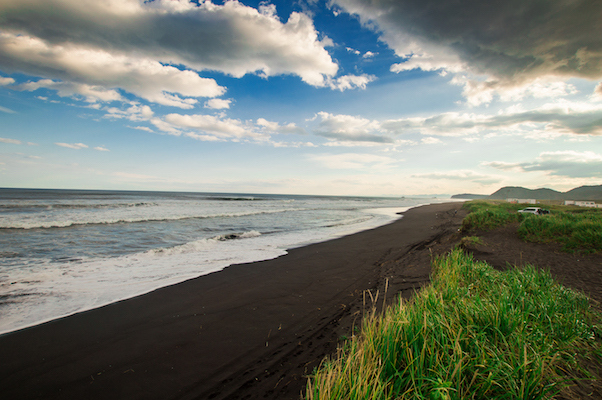 How to get there?

The main transport hub of the Peninsula is the airport. It is located in Petropavlovsk-Kamchatsky. It will be easier to organize transfers or use personal transport to simplify the process. Our company will gladly become your guide with filming and scouting services to this harsh and beautiful land!