Location scouting and filming at sinkholes in Russia and Turkmenistan

Eternal frost and Gates of Hell

This article will tell you about two sinkholes in Russia and Turkmenistan. One of them is beyond the polar circle, the other is located in one of the hottest deserts on the planet Earth. Both sinkholes represent not only scientific but also aesthetic interest.

What is a sinkhole?

A sinkhole results from many different reasons. This happens when there are voids and caves under the ground. These are formed of too active groundwater and gases accumulation. It takes time to form a sinkhole. There is no mystery of what is underneath. The researchers usually come across caves. However, it is not always possible to explore fresh sinkholes because of the collapse danger. There were cases when even a small hole in the ground began to expand, and that led to disastrous consequences. It could also happen if there are many sinkholes at a single location. This took place in Berezniki and Solikamsk, both are the Russian cities. Both cities are located in the territory where mining is conducted. The reason for the formation of the sinkhole was the human economic activity. Since 2006, there have been formed 10 sinkholes of various sizes (the largest is about 500 meters in length), as well as countless places with surface subsidence.

The sinkholes we are talking about here do not pose danger to people. Both of the sinkholes could become great objects to explore and interesting locations for filming.

When it comes to the sinkhole in the Yamal Peninsula, the media mentioned that the sinkhole had appeared out of the sudden.

The hydrolaccolith was observed by scientists in the Yamal Peninsula. In early 2014, there was a release of gases and ice water, and then this hole was formed. The first videos of the flight over the sinkhole, published in the Internet, were shot on the phone with a sufficiently high altitude. Viewers commenting on the video did not understand the true size of the sinkhole at first. They believed it was just a bit of moss and grass. It was such a surprise when they realized there were bushed around the sinkhole, not the moss! 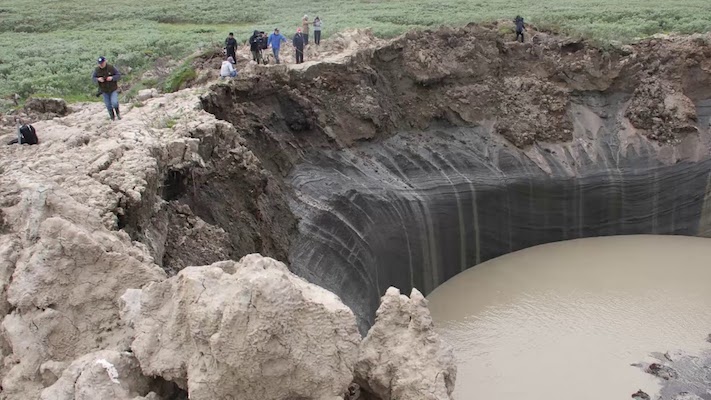 The approximate diameter of the hole at the time of detection is 60 meters. Over the years, the sinkhole has become wider due to the constant shedding of the soil. The remains of the rock, which flew out of the hole with the release, can be found at a distance of 120 meters around.

The depth of sinkhole in Yamal is difficult to measure, as there is the constant shedding of the soil. From time to time ground ice water appears in the sinkhole. The scientists believe now that this sinkhole is a cryovolcano. It is interesting that no volcanos of such origin were ever found on our planet. Science knows only those cryovolcanoes that are on other planets and satellites.

This place (yet untitled) is about 30 kilometers from the nearest place of people residence, the gas field. Usually, people use helicopters in these places. Yamal has one major airport Sabetta. It has a regular connection with Moscow and Novy Urengoy.

Doors to Hell - a burning sinkhole in Turkmenistan

Turkmenistan is the most closed-off republic on the territory of the former USSR. It is also one of the most closed-off countries in the world. Tourists find it very difficult to obtain entry visas, curfews are imposed on foreigners. Also, the local Foreign Ministry constantly monitors all movements of guests around the country. But all this does not stop those who wish to visit Turkmenistan. We will write a separate article on the nuances of entry into Turkmenistan and about the peculiarities of going around the country. There will also be a description of other exclusive locations.

One of the most popular places in Turkmenistan is a karst sinkhole near a small settlement in the middle of the Karakum Desert. The sinkhole is called Darvaz, it is named after a nearby village. A distinctive feature of this sinkhole is that it has been on fire for 47 years. Therefore, there is another name for it "Gates to Hell". Indeed, it looks impressive. The width of the sinkhole is 60 meters, the depth is about 20 meters. 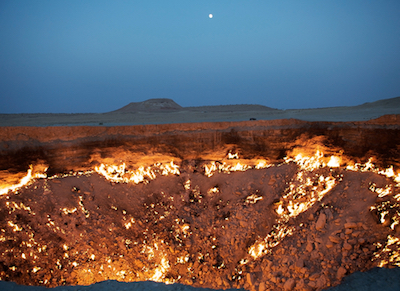 During the Soviet times, many natural gas fields were found on the territory of Turkmenistan. By the way, Turkmenistan is the second country in the world in terms of gas reserves now. Once there suddenly appeared a sinkhole under one of the derricks. Everything fell into it: the derrick itself, and construction equipment. Fortunately, none of the workers were killed. Natural gas was released under high pressure from the sinkhole, and geologists decided to set it on fire to avoid harmful effects on animals and people. They hoped that it would burn out in a few days and it would be possible to continue exploration activities. But the gas torches haven't gone out yet. You can find many articles on the Internet where people write that Darvaza is really a portal to another world. It is very hard to judge whether it is true or not until a personal visit to explore this gas crater.

Despite the inaccessibility of both locations, our company will make every effort to organize your shooting process in the most comfortable conditions. Move on with SOAR Productions!