Our website has already mentioned objects from the Seven Wonders of Russia list which include lake Baikal, Mamayev Kurgan in Volgograd, Saint Basil's Cathedral in Moscow, Peterhof palace and parks in St Petersburg, Mount Elbrus in Kabardino-Balkaria, Valley of Geysers in Kamchatka Krai. In this article we`ll tell you about the Manpupuner rock formations. You`ll learn how to get there and how to obtain the permission for visiting.

Pechora-Ilych Nature Reserve is a nature reserve located between the Komi Republic and Sverdlovsk Oblast. Its territory includes the Manpupuner plateau ("a small mountain of idols" in the Mansi language). This name is related to an unusual geological monument: the set of 7 huge stone pillars, their height varying from 22 to 50 meters. Scientists believe that the pillars are about 450 000 000 years old. As we mentioned, this geological monument is one of the Seven Wonders of Russia. 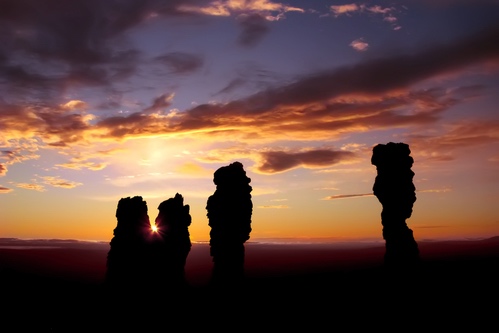 Modern science believes that today`s buttes are weathered mountains of soft rock types. Weathering has been going on for thousands of years and, according to the Nature Reserve staff members, is still in progress. They also consider that the rocks will last for several thousand more years until they deteriorate completely.

On the one side of the plateau lives a Komi tribe, and a Mansi tribe lives on the other side. Both tribes have many legends about the rock pillars, but all these legends have the same narrative. The pillars once were giants who wanted to wipe out the small tribes. And according to these legends, petrified giants will remain there forever, till the end of the world.

The plateau is located in the Pechoro-Ilychski Nature Reserve, in a hard to reach area. To get a better idea, the official hiking trail usually takes about 10 days. During this time hikers have to go through the woods, ford the rivers and sleep in the tents. Apart from the hiking trail there are several other trails, certified by the Nature Reserve administration. The motor vehicles route makes the way much easier, but unfortunately you still have to hike the last 10 kilometers to the plateau. For those who don`t have time for such a long walk there is an option to see the pillars from a helicopter. 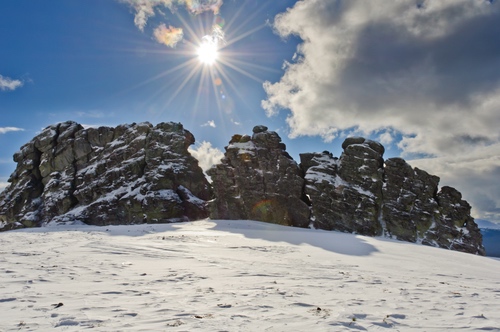 There is also a wild, unofficial trial from the Sverdlovsk Oblast direction, arranged by skilled hikers. But the problem is that this trail is much longer and runs through the territory of two more protected areas, so the journey becomes even more complicated. Given that the Manpupuner is located on the territory of the Nature Reserve, you have to get the permission from the Reserve`s administration. There is a limited amount of passes issued, and those for the new summer season are often already issued in autumn of the previous year. Due to this, if you plan filming in this area you should get the passes in advance. 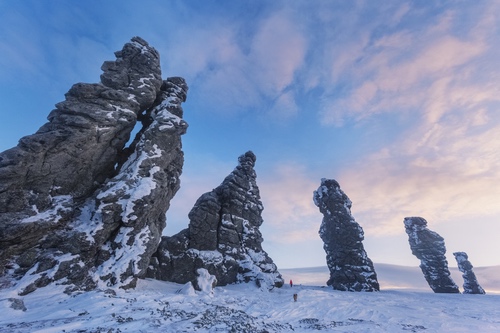 July and August are considered the best visiting time, because there are not so many annoying insects in the summer. But you’ll get the most scenic view in winter, when the stone pillars are covered with snow.

The nearest big airports are in Ekaterinburg and Syktyvkar cities.

If your project requires studying or outdoor shooting in this amazing place, our team will be pleased to arrange your logistics.