The Udmurt Republic, or Udmurtia, is located in Central Russia, to the west of the Ural Mountains, between the branches of two big rivers: the Kama and the Vyatka. The capital city of Udmurtia, Izhevsk, is about 1000 km from Moscow; you can get there by plane (1.5 hours) or by train (17 hours).

The capital city, Izhevsk, is world famous for its industry. Especially the arms industry, of course. That`s why the most popular museum of the city is dedicated to the world`s most famous assault rifle and its inventor Mikhail Kalashnikov. If you have ever felt curious about what it feels like to fire an AK47 – you can try it at a shooting range in the museum`s basement.

The Museum of Udmurt architectural and ethnographic culture `Ludorvay` on the outskirts of the city is an unique opportunity to travel back in time. You`ll be able to visit the households, try Udmurt traditional foods, ride a horse, feed the domestic animals of the farmstead, attend local craft workshops and celebrations.

This town is famous as a birthplace of the most popular Russian composer - Pyotr Tchaikovsky. The house where he was born and spent his early years now is preserved as a museum. Near the town there is the official residence of Tol Babay, the Udmurt Santa Claus. 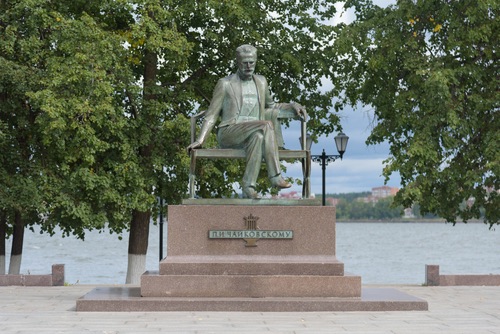 Another interesting place near Votkinsk is Muvyr village: the location where the first Udmurt movie was filmed. The film `The shades of Alangasars` tells the story of the local tribes, their life and rituals. Originally built as a temporary set for the film, the village is abandoned now.

Sarapul is the oldest town of Udmurtia. Once upon a time it was very rich merchant town, and now the city center looks like an outdoor museum of the 19th century`s architecture.

There are many inspiring natural wonders in the Udmurtia Republic. The Baygurez mountain with the stunning view of the river below. Zuevy Klyuchi with its healing springs. Ust-Belsk National park with its beautiful pathways along Kama banks. The mysterious Chegandinskye caves. And, of course, Nechkinsky National Park with its magnificent landscapes and ancient archaeological sites. If you`re interested in filming in any of these places, please contact us and we`ll help you with location scouting.